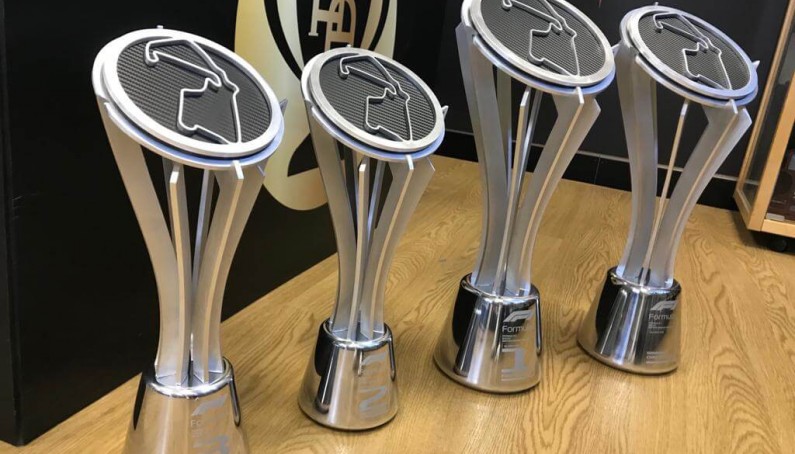 Trophies designed and made by Aford Awards were supplied for the British Grand Prix for the third time!

The Bearsted-based company say “it feels like scoring a hattrick!” to have been asked to create the awards again for the race at Silverstone this weekend just gone (12th-14th July).

Lewis Hamilton lifted the trophy made by Aford Awards in both 2016 and 2018.

Managing Director, Jon Ford, said: “As we specialise in motorsport awards it’s crucial that we can supply the pinnacle of the sport.

“We collaborated with our design partners from previous years to come up with a range of designs which F1 then picked from.

“The team we have to create the designs are very skilful and creative people so I’m always confident we can come up with a design that can inspire anyone.

“The awards normally take around 6 weeks to make after the design process is complete.

“The materials used need to be ordered and then cut to shape and sometimes anodised to make them the correct colour.

“The process is very detailed so time is taken to make sure the awards are exactly as the design.

This all comes as the company say they’ve reported a record year so far.

Jon adds: “For us here at Aford Awards the early part of the summer is extremely busy from May through to the end of July as that is when most sports are in full flow.

“We make and create a large volume of Football awards as well as motorsport awards during this period.

“We are just coming out of peak season now and have had a record year so far, the team here at Aford Awards have been working their socks off to get orders delivered on time ready for presentations all over Europe.”

To celebrate the achievement Aford Awards has donated 4 tickets to families at Demelza Hospice Care for Children.

The charity provides care and support for seriously ill children, young people and their families across Kent,  East Sussex and South East London.